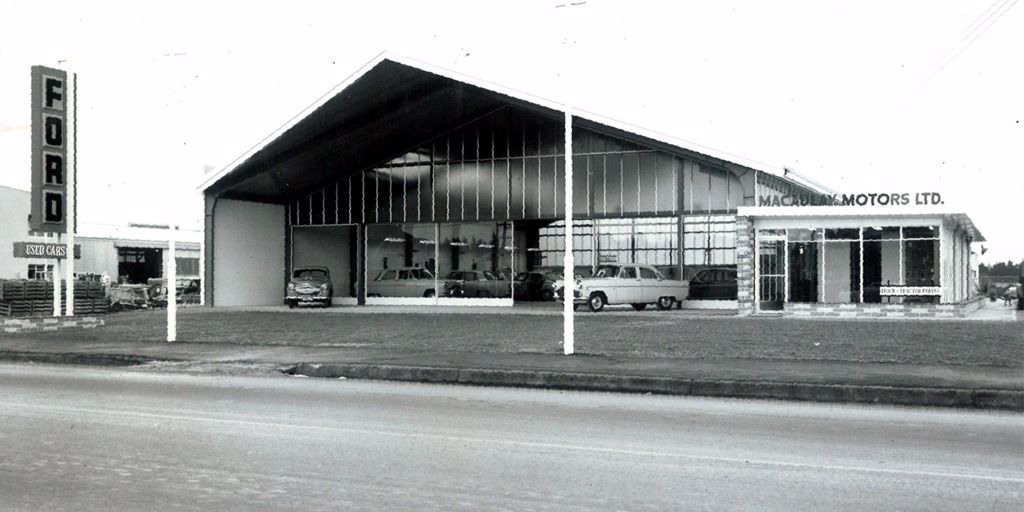 The company was incorporated on the 22nd November 1935, and on 4th December commenced operations in Invercargill by purchasing the assets of the old established firm G W Woods & Company, who had been the Ford dealers in Southland since early in the century.

The garage was at the rear of what is now Waxy O'Shea's, with access down an alleyway. Almost immediately the major problem was congested floor space, and within 12 months investigations were being made for larger premises. As a temporary measure additional premises were leased for a vehicle bulk store and a used car reconditioning department. World War II delayed the expansion plans but the bulk store was retained and during the war was sublet for the storage of wool.

In 1942 the main premises, now Spotlight, was purchased from the Ward Estate, along with a block of buildings fronting Dee Street, now Waxy O'Shea's. Then followed a complete redesigning of the premises. War time building restrictions and existing tenancies delayed immediate building alterations, but soon steady progress was made. Originally a livery and bait stables, the Dee Street premises was seriously damaged by fire in 1915. During the course of the blaze the roof collapsed and a new roof was built on the existing walls.

In 1956, at a cost of over 20,000 pounds, new showrooms, offices, a parts and accessories division and staff facilities were built. During the course of demolishing the old offices there were still signs of the 1915 fire visible on the roof beams.

Earlier in 1954 five houses were purchased further north at Avenal, an area of 3/5 of an acre. The residences were demolished to permit the erection of a modern lube bay, truck servicing and tractor departments on the east side of Dee Street.

These additions still proved inadequate and in 1962 a further quarter acre section opposite was acquired. This provided a modern new car pre-delivery section, a truck and tractor parts department, truck servicing shop and a used car department. This new area began operations in 1964, leaving the central city site as purely new car sales with servicing and a parts department.

Successively over the years the dealership acquired more property bordering Fox and Liffey Streets. The old dairy on the corner was demolished along with several houses to make way for a new workshop. The finale of the centralisation of the Avenal sites was agreed in 1977 following the recession in the motor industry, with the decision to centralise all parts and workshop operations at Avenal. This meant that for the first time in some 20 years Macaulay Motors had all of its facilities in the one area.

The site has undergone many changes and significant expansion since the late 70's. The original Avenal site, now Avenal Park Funeral Home and Riverside Rentals, was sold, and tractors moved to what is now Agricentre South Kubota branch in the early 80's.

In 2005 two properties directly opposite on Fox Street were purchased which is now our parking area for all new and used vehicles.

In 2008 the Pizza Hut property was purchased on the North West corner of Dee and Fox Streets, the building was demolished and our used commercial and budget car yards now occupy this area.

In 2017 we commenced an extensive renovation to the Invercargill site, with significant upgrades to our workshop, and the addition of a customer business centre.

With a great deal of our clients in the Queenstown area a Service operation was opened in 1990. Due to the significant growth seen in the Wakatipu area over the past 20 years we have expanded to become a full Ford dealership with parts, service, new and used vehicle sales in Frankton. This expansion has continued and in December 2018, the day before Christmas, we opened the brand new Queenstown facility at Five Mile, Frankton.

With the huge growth in Wānaka over recent years, along with our customer base growing in the area and surrounding districts, the decision was made to invest in the area with a brand new Service Centre.  Located in McCormick Street in Three Parks, Wānaka, the new purpose-built Wanaka branch is a fantastic opportunity to offer customers more convenience by having the choice of whether they want to use Queenstown or Wānaka for their parts, servicing and repair, and warrant of fitness needs.

View all the latest news from Macaulay Ford